The resources gathered here are focused on the current Syrian conflict and the international responses to military intervention.

Syrian Letters to the U.N.

Below is a collection of recent letters from the Permanent Representative of the Syrian Arab Republic to the United Nations addressed to the Secretary-General and the President of the Security Council.

September 6, 2013
Concerns alleged statements made by Saudi Arabian officials and the role of Saudi Arabia in the events in the Syrian Arab Republic.
September 5, 2013
Refers to the 14th report of the Analytical Support and Sanctions Monitoring Team Established pursuant to Resolution 1526 (2004) (S/2013/467); states that the report allegedly fails to mention the acts of terrorism committed in the Syrian Arab Republic by Al-Qaida.
August 31, 2013
Refutes allegations of use of chemical weapons by the Syrian Arab Republic.
July 30, 2013
Reports recent attacks on civilians and military personnel in Khan Asal allegedly carried out by the Liwa Ansar al Khilafah (Supporters of the Caliphate Brigade) group; also reports attacks in Jisr al-Shughur in Idlib, the village of Hatlah in Dayr al-Zawr and other locations in the Syrian Arab Republic.
July 25, 2013
Reports an armed incident in Rif Dimashq allegedly carried out by the Islamic State of Iraq and the Levant terrorist organization, on 25 July 2013.
July 9, 2013
Transmits the comments of the Syrian Arab Republic concerning the report of the Secretary-General on the implementation of Security Council resolution 1701 (2006) for the period from 1 Mar.-28 June 2013. 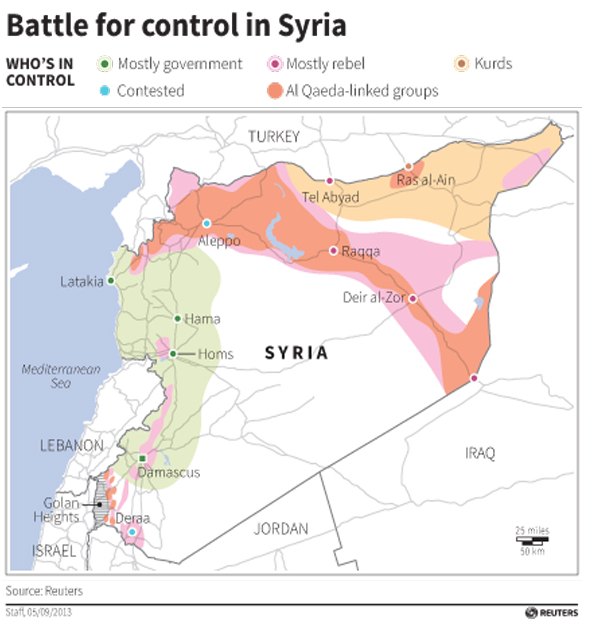 Timeline of Unrest in Syria

Who Are the Rebels?
What are their movements?