The purpose of Florida’s District Courts of Appeal is to provide the opportunity for thoughtful review of decisions of lower tribunals by multi-judge panels. District Courts of Appeal correct harmful errors and ensure that decisions are consistent with our rights and liberties. This process contributes to the development, clarity, and consistency of the law.
http://www.flcourts.org/florida-courts/district-court-appeal.stml

"Territorial jurisdiction" is an apt term to describe the judicial power of a district court over a given judicial circuit since the judicial power of the district courts is distributed geographically. It would also be proper to characterize the matter as one of appellate venue, however, since the issue relates only to the location of the forum. With that explanation, the former term "territorial jurisdiction" has been chosen for use throughout this book.
Philip J. Padovano, Florida Appellate Practice, v. 2,  §4:2 (2015 Edition) 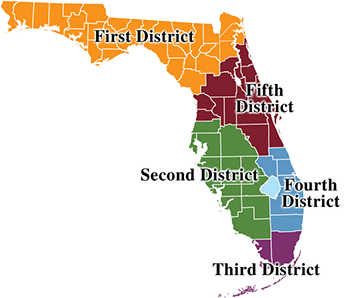 (b) Jurisdiction of District Courts of Appeal.

(1) Appeal Jurisdiction. District courts of appeal shall review, by appeal

(A) final orders of trial courts,1, 2 not directly reviewable by the supreme court or a circuit court, including county court final orders declaring invalid a state statute or provision of the state constitution;

(B) non-final orders of circuit courts as prescribed by rule 9.130;9

(2) Certiorari Jurisdiction.8 The certiorari jurisdiction of district courts of appeal may be sought to review

(A) non-final orders of lower tribunals other than as prescribed by rule 9.130;

(B) final orders of circuit courts acting in their review capacity.

(4) Discretionary Review.10 District courts of appeal, in their discretion, may review by appeal

(B) non-final orders, otherwise appealable to the circuit court under rule 9.140(c), that the county court has certified to be of great public importance.