Books on the Florida Supreme Court

(a) Jurisdiction of Supreme Court.

(A) The supreme court shall review, by appeal

(i) final orders of courts imposing sentences of death;1

(ii) decisions of district courts of appeal declaring invalid a state statute or a provision of the state constitution.2

(B) If provided by general law, the supreme court shall review

(i) by appeal final orders entered in proceedings for the validation of bonds or certificates of indebtedness;3

(A) decisions of district courts of appeal that5 March 23, 2017 Florida Rules of Appellate Procedure 14 The Florida Bar

(ii) expressly construe a provision of the state or federal constitution;

(iii) expressly affect a class of constitutional or state officers;

(iv) expressly and directly conflict with a decision of another district court of appeal or of the supreme court on the same question of law;

(v) pass upon a question certified to be of great public importance;

(vi) are certified to be in direct conflict with decisions of other district courts of appeal;

(B) orders and judgments of trial courts certified by the district court of appeal in which the appeal is pending to require immediate resolution by the supreme court, and6

(i) to be of great public importance, or

(ii) to have a great effect on the proper administration of justice; 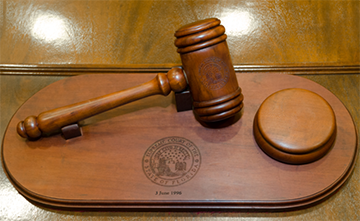