The Village Green at the Florida State University College of Law 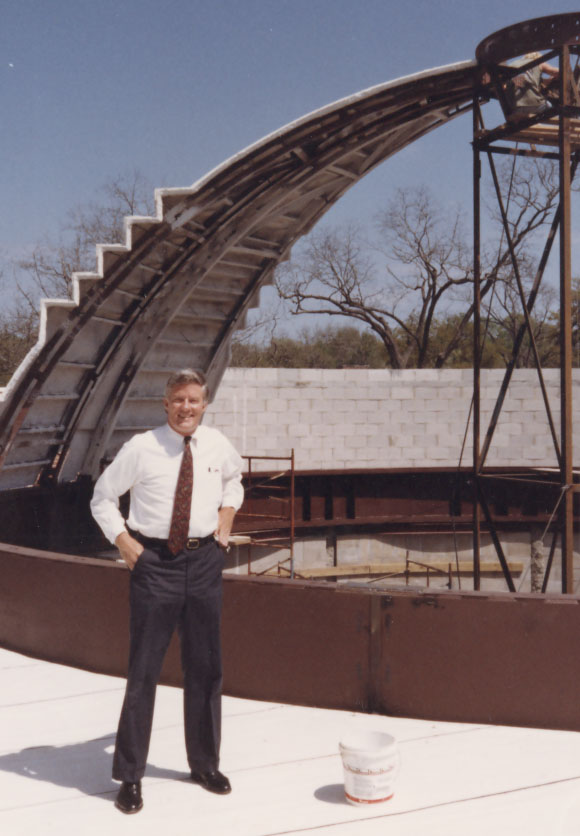 The man behind the ambitious plan to beautify and expand the law school is former College of Law Dean and Florida State University President Talbot D'Alemberte. The following is from a July 8, 1985 Tallahassee Democrat article by Renee Mitchell, "Dean dreams of village green at FSU":

"When Dean Sandy D'Alemberte looks out his office window at the FSU College of Law, he envisions a cluster of historically restored homes connected by a columned, winding walkway. And a three-story rotunda...where wide steps could serve as a platform for judicial debates, and a domed skylight, capping an underground dining room that would seat 600...He envisions, in other words, a $5-million village green...The project blossomed while D'Alemberte was studying, for design possibilities, some of Thomas Jefferson's architectural ideas. He said the site is ideal..."There is no law school in the nation that has a better location than we do. We are next door to the places where great lawyering is going on."  Yet, the side view of the school from the appeals and district courts, the Supreme Court and the Capital is nothing but a brick wall. "We are not yet an inviting facility architecturally...What you want is a structure to hide the present building. We don't want to present that brick wall to the world. We want to invite them into our space. I want the law school to communicate with the courts." The four houses will be used as classrooms and offices for administration, job placement, and student organizations. [The Rotunda addition] will house faculty offices and labs, seminar and audio rooms...It's amazing how well the houses will fit. If we do it right, Thomas Jefferson will not be insulted that we copied his idea." 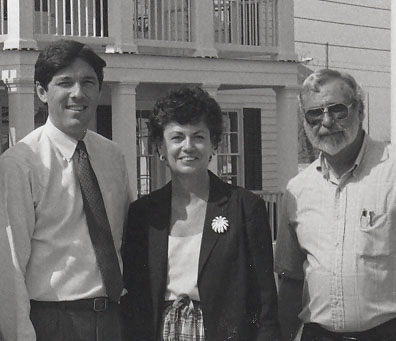 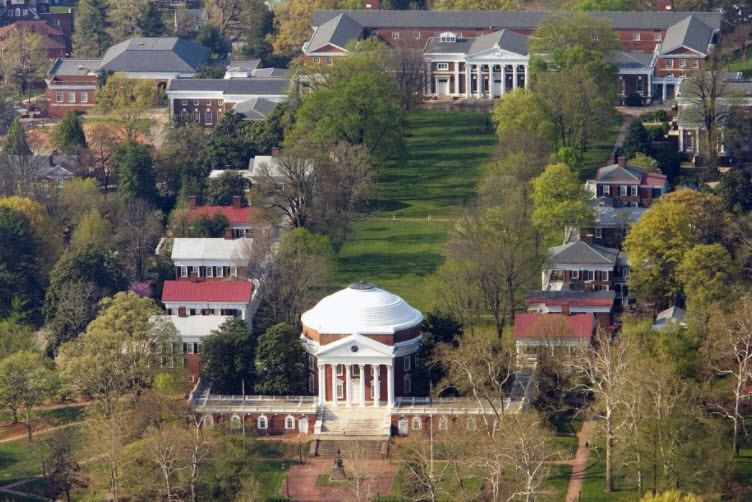 Thomas Jefferson designed the heart of his University of Virginia as a Lawn surrounded by ten Pavilions connected by colonnades, walkways, and gardens. Faculty were housed on the upper floors of the Pavilions, and taught on the ground floors. Some students also occupied Lawn rooms, as the open, outdoor spaces were designed to promote interaction and discourse between the students and faculty. The buildings on the outer perimeter housed graduate students. At the Lawn's head sits the Rotunda with its central dome. Inspired by Rome's Pantheon, the Rotunda housed the university's focal point, the library.  Founded in 1819, the first students were on campus at the University of Virginia by 1825. 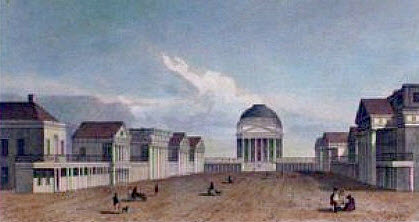 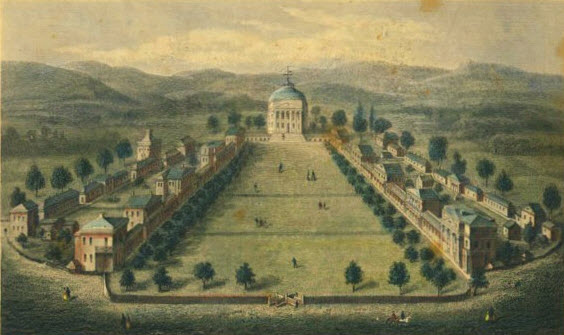 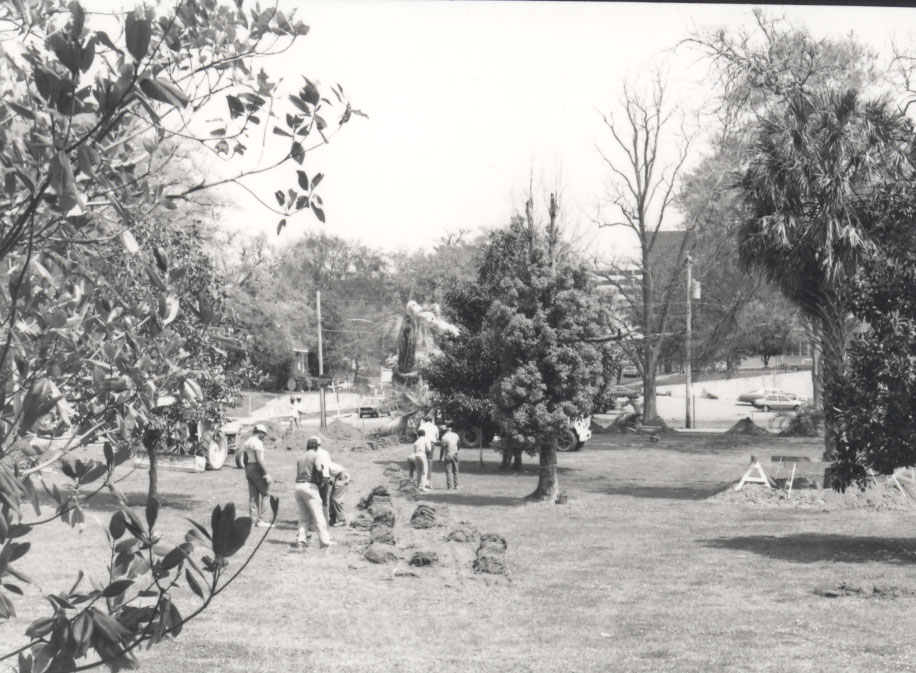 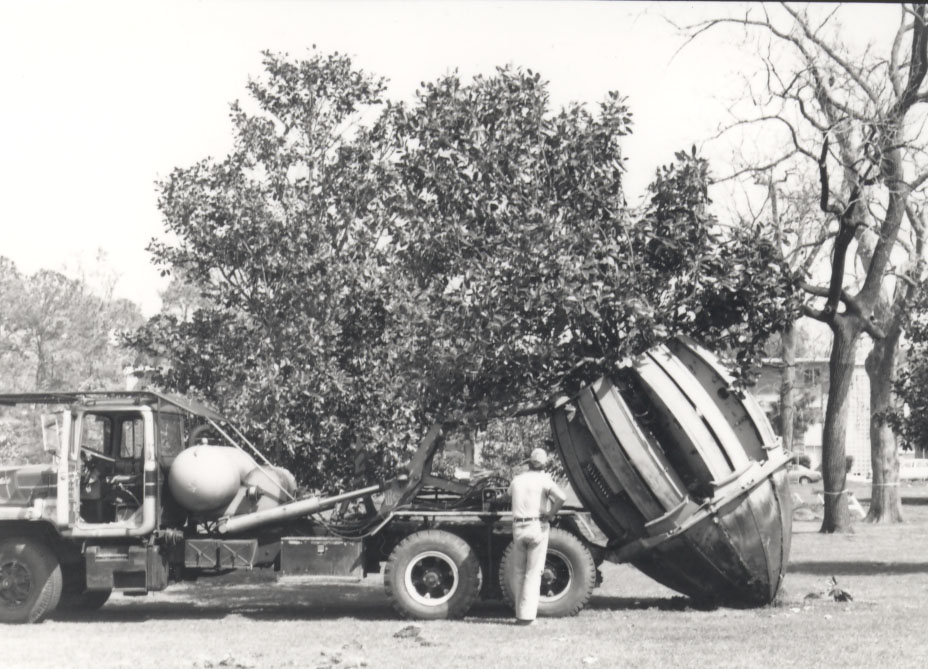 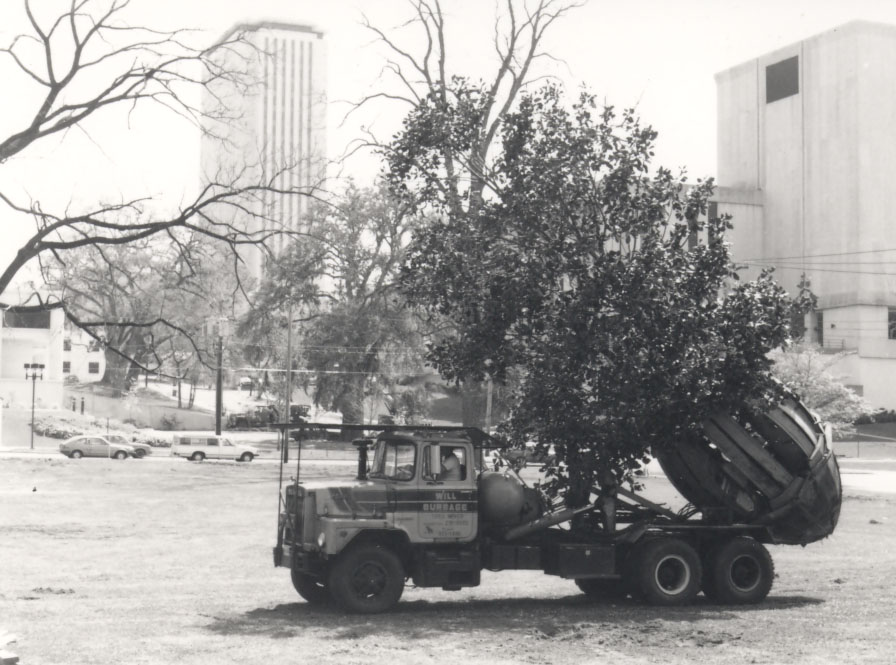 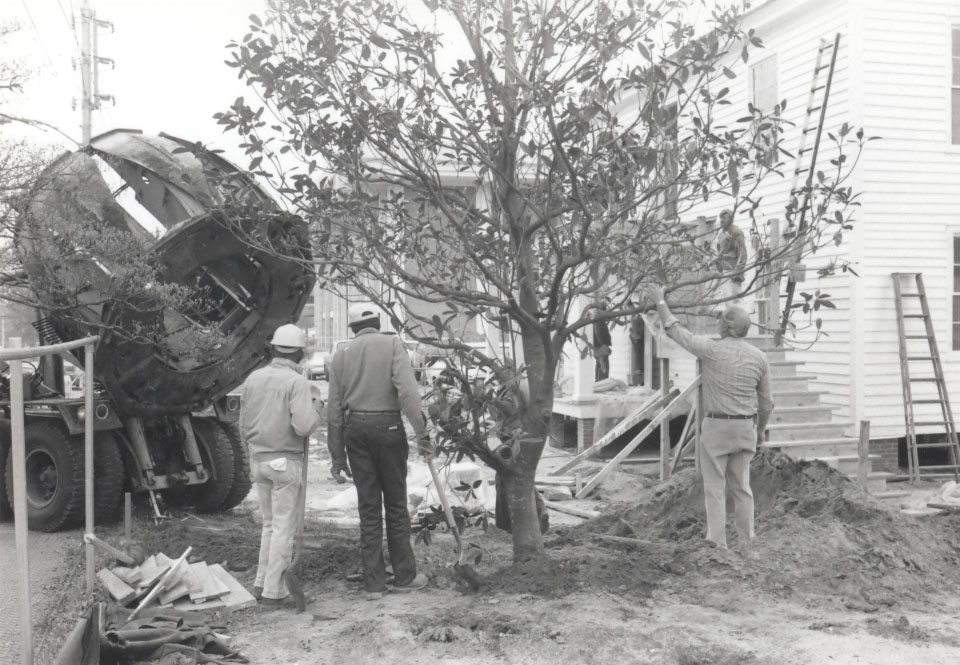 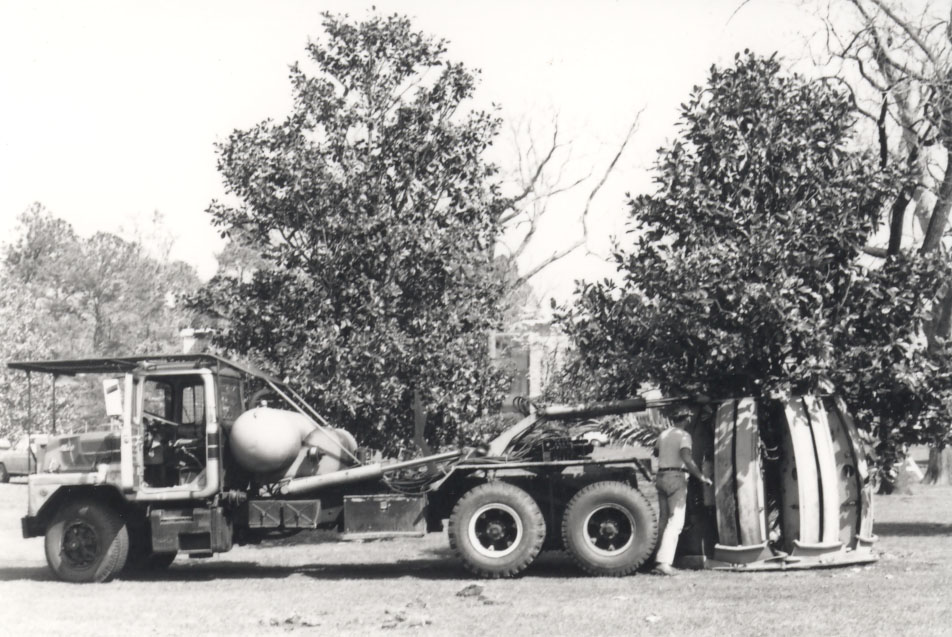 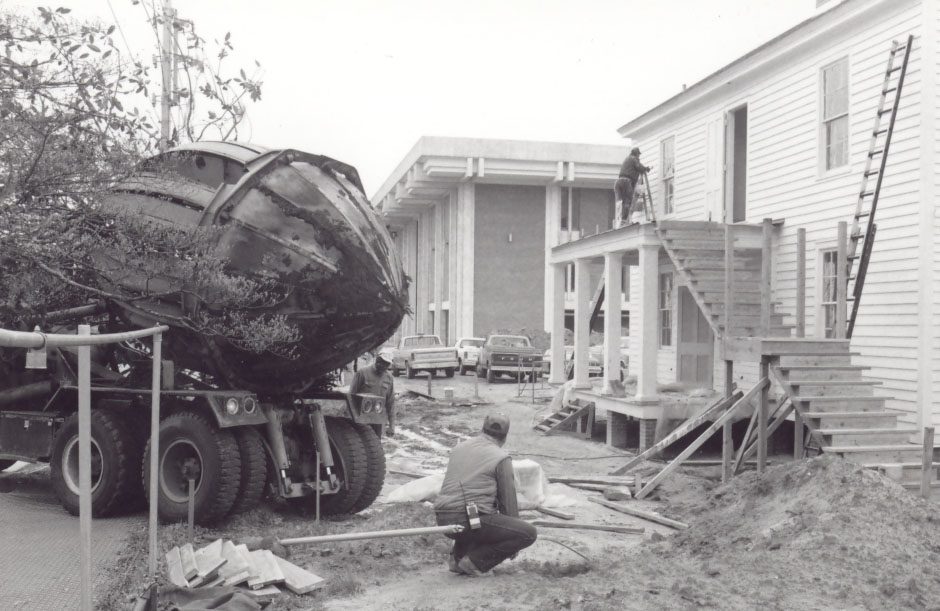 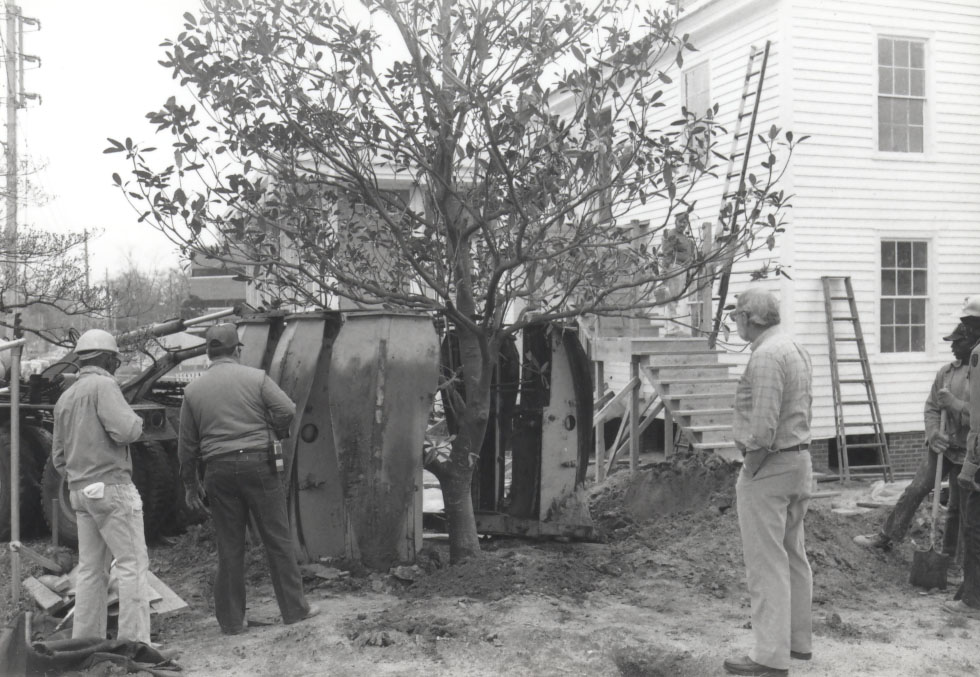 From the dedication of the Ausley House, the structure completing the Villager Green:

"It is remarkably fitting that this Village Green houses the Collins Center for Public Policy, named for [Charles and John Ausley's] longtime partner and political friend; the Cawthon House, inspired by the family of their close friend and political ally, Rainey Cawthon; the Caldwell House, the house of their friend and frequent worthy legal adversary Governor Millard Caldwell; and abuts Roberts Hall, named for their old friend, Justice B.K. Roberts, whose office adjoined Charles' in the early 1930's. The presence of these names on the Village Green is a testimonial of their commitment of their generation to free and open debate, high ethical standards, and aggressive advocacy in which treating opponents with courtesy and civility were virtues of strength, rather than signs of weakness."

The Village Green Project was not without its critics. Some questioned moving historic houses from their original locations. One letter writer said: "Buildings truly endangered are benefited by your efforts.Those removed from their historical context for the sake of filling a void in the Green Project are not."  Another critic spoke of the costs involved: "On Dec.11 I picked up the paper and saw that the sales tax had gone up another penny because the state needed the money. On Dec.12 we read about how the FSU Law School was dragging old houses onto its lawn and spending $4.8 million on further expansion at a time of declining enrollment."

The removal of trees for the project was also controversial.  When it became known that four canopy trees on Old Bainbridge Road would be taken out in order to move the Caldwell House to the green, one citizen wrote: "I implore you to pass up this house and redirect your efforts in seeking resources for your project that do not require the removal of irreplaceable trees...It is inconceivable to me that the placement of any home on your green can surpass the importance of preserving the heritage and natural beauty of the canopy trees in this area." On the green itself, two valuable and rare black walnut trees were removed, as was a pecan and a camphor. Twenty palms were relocated to other areas of the campus. Magnolia trees were temporarily relocated to the north side of the law school, and replanted when construction was completed. Healthy and beautiful trees were eventually planted to replace those that were sacrificed. Still, one anonymous letter writer said: "Regarding your attempt to "preserve history" by moving houses all over town...Trees are a bigger part of history than any house could ever be...When trees come up against politicians with big money and lots of power, the trees always lose."

Research & Author of this Guide

Research, writing of the text, and selection of materials for this guide was done by retired FSU Law Librarian, Pat Bingham-Harper.