Agencies are "bureaucratic institutions entrusted with the implementation, management, and administration of our law and public policy." Cornelius M. Kerwin & Scott R. Furlong, Rulemaking:  How Government Agencies Write Law and Make Policy, 4th ed. 3 (2011). They are agents of their principals -- the three constitutionally created branches of government -- who delegate legislative, executive and judicial functions to agencies. The United States Code defines the term "agency" broadly, by excluding from the definition only Congress, the United States courts, and the governments of United States territories, possessions, and the District of Columbia.  U.S. Code  § 551 (2010).  This leaves a huge range of government departments, bureaus, commissions, boards, administrations and agencies within the definition of "agency."  Peter L. Strauss, et al., Gellhorn and Byse's Administrative Law Cases and Comments, 11th ed. 12 (2011).

A federal agency exists because Congress determined that some problem needed regulatory oversight. An agency's powers are granted by Congress in an "enabling act," sometimes referred to as an "organic act," and in other specific legislative grants of power. See Administrative Statutes tab. The exercise of those powers, through rulemaking and decisonmaking, is the subject of administrative law. An agency's power to promulgate legislative regulations is limited to the authority delegated by Congress. Bowen v. Georgetown Univ. Hosp., 488 U.S. 204, 208 (1988).

5 U.S.C. Part I - The Agencies Generally 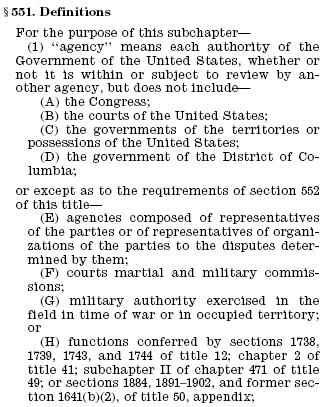