What is a Rule? What is Rule-making? 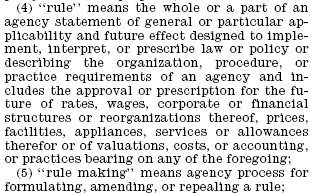 The Administrative Procedure Act (APA) creates several rulemaking categories (formal, informal; legislative, interpretive) and applies different procedures to the various categories.  Section 553 of the APA, for example, governs the making of "legislative rules" (those that create law, rights, or duties), while the procedure for creating "interpretative rules" (those that clarify an existing statute or regulation) exempts some s. 553 requirements. 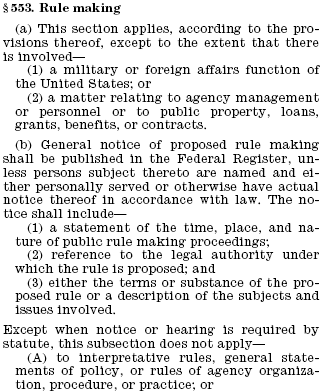 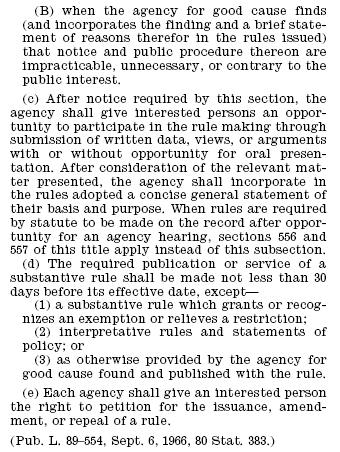 Congress passes a law that requires or allows an agency to pursue its goals through rulemaking.

The agency may issue an Advance Notice Of Proposed Rulemaking (ANPRM), which is a preliminary notice, published in the Federal Register, announcing that an agency is considering regulatory action. Agencies typically issue ANPRs in order to gather more information prior to making a decision whether to begin a formal rulemaking. The ANPRM describes the general area under regulatory consideration and usually asks for public comment on the issues and options discussed.

An agency issues a Notice of Proposed Rulemaking (NPR), published in the Federal Register, to describe and solicit public comments on a proposed regulatory action.  The APA req

See here for an explanation of when a document will appear in the Federal Register.

The Unified Agenda of Federal and Regulatory Actions ("Unified Agenda"), published in the spring and summer each year, provides information about regulations that agencies are considering or reviewing.  The complete Unified Agenda is available at http://reginfo.gov.

Since the Fall 2007 edition, only agenda entries required by the Regulatory Flexibility Act appear in the Federal Register. 5 U.S.C. s. 602.  These entries either describe regulatory actions the agencies are in the process of developing that may have "a significant economic impact on a substantial number of small entities"  have been selected for periodical review under s. 610 of the Regulatory Flexibility Act. 5 U.S.C. s. 610.

Executive Order 12866 "Regulatory Planning and Review," 58 FR 51735, and Office of Management and Budget memoranda establish minimum standards for agency agendas, including specific types of information to be included.  Agencies generally include activities that will have a regulatory action within the next 12 months, but may include activities with a longer timeframe.  Agencies also include actions or reviews that were completed or withdrawn since the last Unified Agenda.